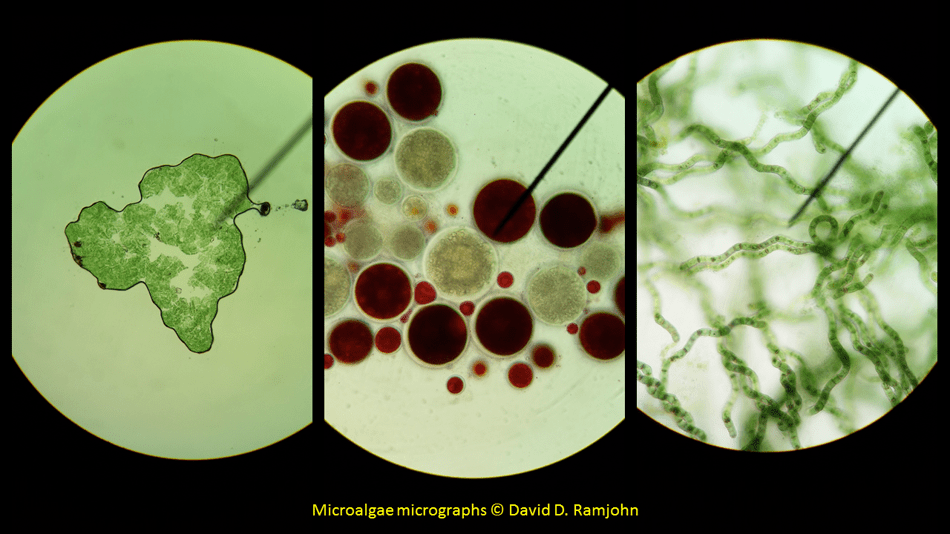 Microalgae can reverse Global Warming that drives Climate Change. They did it once before and they can do it again if we harness their ability in diverse sustainable economic activity while changing our patterns of production and consumption from linear to circular. Approximately two point seven billion years ago Earth’s atmosphere had no free oxygen. Life prior to this time was anaerobic, and all life forms were single-celled since the energy supply and biogeochemical processes would not support multicellular life. No mechanism in Nature could make the sun’s energy readily available to living organisms and support the development of complex life and the ecosystems they occupy.

Enter oxygenic photosynthesis, the single most important biochemical process on Earth, which simultaneously converted the sun’s energy to glucose—the building block of carbon-based life, while producing one of the most toxic elements on the planet: free oxygen. Oxygen is toxic, reacting with virtually everything, forming oxides—think rust. To us aerobes it is the stuff of life but to anaerobes, deadly! Even within our cells, if oxygen escapes metabolic pathways it wreaks havoc and we must take antioxidants to prevent cellular damage. But we would not be here if not for oxygen and we would have no oxygen if not for microalgae, which still produce over fifty percent of the free oxygen on Earth.

“Climate Change” and “Global Warming” are not the same thing. Global Warming refers to the increase in the average temperature of the Earth’s surface and atmosphere resulting from changes in the atmosphere’s composition and the Earth’s surface that cause the Earth to retain more heat than it releases back into space. Climate Change refers to persistent changes in weather, i.e. wind, precipitation (rain, sleet, snow, hail), temperature, humidity, cloud cover, severe weather events such as hurricanes, typhoons, cyclones, tornadoes, etc. that occur as a result of Global Warming impacts on the atmosphere. Weather is temporary; Climate reflects the most common weather experienced by geographic region. Climate Change, therefore, refers to a noticeable change in the average weather conditions of any geographic region, and this could be less or more precipitation, higher or lower temperatures, less or more frequent or increased/decreased intensity/duration of severe weather. If you find yourself saying “we never had so much/little rain/snow when I was young” or some similar observation on persistent changes in weather conditions in your region, then you have witnessed a Climate Change event in your lifetime, accelerated by Global Warming.

The first oxygenic photosynthesizers were cyanobacteria, the ancestors of modern microalgae. Microalgae arrived on the scene about 650 million years ago and became and remain the dominant primary producers of glucose and oxygen on the planet. Photosynthesis by these voracious carbon sinks, in a biosphere with little to no aerobic respiration, caused a massive drop in temperature triggering the first ice age, the Huronian glaciation. Microalgae caused the first climate disaster on Earth when for a period of approximately 300 million years the planet was a snowball. But it was not just the changes to the atmosphere engineered by Nature’s nanites, microalgae, that impacted our climate; Microalgae were among the first to colonize the early lithoseres together with fungi in a symbiotic organism we know as lichens. Researchers recognize that ecological succession on bare terra firma begins with colonization by crusts of lichens and algae. They contribute significantly to the biological weathering of rocks and the formation of soils, which are another important carbon sink that regulates greenhouse gas in our atmosphere. Healthy soils hold carbon; unhealthy soils emit carbon. The connection is clear: healthy soils help regulate climate and healthy soils have ecosystems that rely on microalgae.  Transformation of the atmosphere to an oxygen-rich one resulted in biogeochemical changes that supported aerobic life forms and ultimately the development of complex multicellular organisms with complex ecosystems, all supported by microalgae. If microalgae disappeared from Earth then the planet could not support our life form: oxygen levels would decline disastrously; GHGs would accumulate and the planet would become too hot for us; ecosystems would collapse because the planet’s primary producers were suddenly gone. Yet humans have either blithely or obliviously disrupted and damaged almost every natural system built by microalgae that supports us. We destroy our soils with chemicals, monocropping, and physical upheavals. We spew GHGs and other pollutants into the atmosphere. We pour nutrients, chemicals, and other wastes indiscriminately into our waters. We destroy ecosystems and the organisms that rely on them. We take more than we need, waste much of what we take, with little concern for the fate of future generations. Ironically, the present generation now feels the effects, such as Climate Change, of previous generations’ profligacy.

Climate Change is merely the tip of the iceberg; we have horrendous cascading impacts heading our way. But we have the knowledge and capability to harness microalgae to reverse and repair the damage we have done. Microalgae were the first Carbon Capture Use and Storage practitioners on Earth and they remain the most efficient at it. Petroleum, upon which the global economy relies, is nothing more than ancient algae, which we burn, thus releasing their sequestered carbon back into the atmosphere with the consequent Global Warming that drives Climate Change. This means that whatever we can do with petroleum, we can do with microalgae, e.g. energy, food, feed, biomaterials, chemicals, wastewater treatment, carbon capture, and use, etc. By adopting microalgae as a truly sustainable economic platform while changing from linear to circular economies and living within the means of the planet, we just may keep Earth hospitable to us and future generations.

David holds a B.Sc. in Marine Biology and an M.Sc. in Environmental Studies (Policy and Law), with over 20 years’ experience in sustainable development and environmental and natural resource management. He won the 2004 Bishop Robert Smith Award from the College of Charleston in South Carolina, and the 2002 Betty Spence Conservation Award from the South Carolina Wildlife Federation. David belongs to the Phi Kappa Phi Honor Society, the Golden Key Honor Society, and the National Society of Collegiate Scholars. He was recently inducted into the 2019 Edition of “Marquis Who’s Who in America”.

David believes that entrepreneurship, ecocentrism, and education hold the keys to widespread adoption of the sustainable algae economic platform for true environmental, social, and economic benefits. David believes that humans must plan for a post-petroleum world; he views algae and their applications as the natural successor to fossil hydrocarbons to sustainably provide products and critical ecosystem services and support the transition to a circular economy. David posits that harnessing the power of algae represents the single greatest opportunity for humans to ensure that Earth remains hospitable to our species—saving our place on the planet.