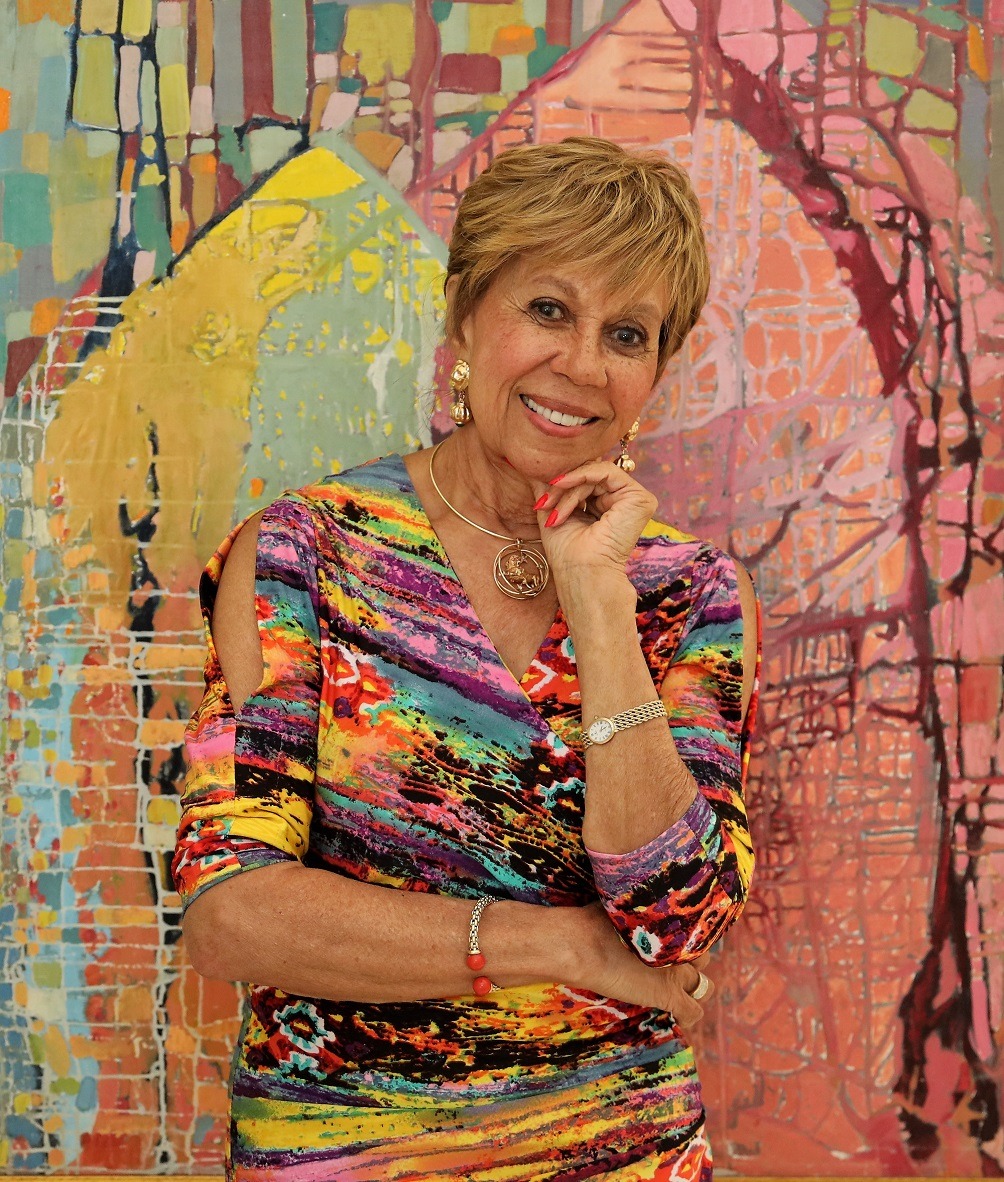 Alpha Blackburn is Inspiring Philanthropy Through Building Youth and Community

Excerpted from Mrs. Blackburn’s 2018 official biography:  “Alpha Blackburn is retired president and CEO of Blackburn Architects and, in that capacity, led the development of a $4M public art program for the $1.1B Indianapolis Airport. Notable projects for her firm include: Finalist (with Norman Foster + Partners) for the National Museum of African American History and Culture (Washington, D.C.), Owners Technical Representative – New Indianapolis Airport, The Malcolm X Institute at DePauw University, The Center for Leadership Development, The Purdue Black Cultural Center, a Distinctive Destination of the National Trust, and the National Underground Railroad Freedom Center, Cincinnati, Ohio.

A national award-winning designer and former TV host, Blackburn is a successful businesswoman, who has shown her dedication to her community by serving on more than sixty (60) boards and committees. Ms. Blackburn served on the board of the Indianapolis Symphony Society, Key Bank Regional Board, One America Mutual Insurance Holding Company, Indianapolis Cultural Development Commission, and the Indianapolis Museum of Art. She has served on the Indiana Civil Rights Commission since 1989 and, for 27 years, served as their chair.  Alpha has also been honored as a Distinguished Hoosier by Former Governor, Mitch Daniels, and serves as Vice Regent Emerita, Mount Vernon Ladies Association of the Union.

Ms. Blackburn is the recipient of many awards and honors including the Hope Award from the Multiple Sclerosis Society, Outstanding Woman of the Year 2004, the Indiana Torchbearers Award from the Fashion Group International and Everything Underground, Outstanding Woman of the Year and inaugural inductee to the Madame  C.J. Walker Hall of Fame, the Trailblazer Award from Indiana Black Expo and the Spirit of Freedom Award from the Indiana Civil Rights Commission with appointments from seven Indiana Governors. The City of Richmond proclaimed February 27, 2001, Alpha Blackburn Day. Mrs. Blackburn penned the Forward and graced the cover of Who’s Who in Black Indianapolis, 2010. She also received the Spirit of Philanthropy Award in 2012 from Indiana University-Purdue University, Indianapolis IUPUI and in 2017, she was awarded the Chancellor’s Medal from the same university. This year, the Board of Trustees at Judson University in Chicago voted to confer an Honorary Doctor of Humane Letters on Alpha at the 10th Anniversary of GLAM, an expansive mentoring program for girls founded in Indianapolis by Shanel Poole. The ceremony and celebration are scheduled for September 5th, 2019.”

As is evidenced by Mrs. Blackburn’s official biography, her humanitarian contributions became as great as her professional work, and during the years working with her husband, they were well recognized for both.  Walter passed in 2000 while working on designing The National Underground Railroad Freedom Center in Cincinnati, OH.  Together, they shared their wealth, heavily investing in higher education in Indianapolis through providing scholarships and funding arts and charities.

Through the Alpha and Walter Blackburn Scholarship Fund, which was founded in 2004, Alpha sees that scholarships are provided for those in most need and who have the ability to make something of the education. (Video here of awards ceremony for architecture students receiving scholarships)  Some years later, Mrs. Blackburn established the Alpha Blackburn Scholarship for the Arts at Herron School of Art and Design at Indiana University-Purdue University, Indianapolis to support and encourage young artists.  This scholarship is particularly special to Alpha, as she said her late husband, Walter, took art classes at Herron as a boy.

I asked Alpha a few questions in order to allow her to share a bit in her own words.

Q & A with Alpha Blackburn:

Q:  How did you come to humanitarian work – were you raised with this mindset?

A:  My late husband, Water’s Dad was a social worker.  Cleo Blackburn ran a settlement house in Indiana for forty years.  He developed programs that are actually still needed today…gardens to feed the needy that he was serving, teaching them how to can food, and other sustainable skills.  He introduced to Congress the concept of “The Board for Fundamental Education” to elevate experiential education and life quality for those who had migrated from the South after the war.  He also initiated a “sweat-equity” housing project (a term picked up by President Carter) to help returning veterans to secure loans and start to build their own homes.  Five hundred homes were built and many are still within the same families today. Philanthropy went way back with Walter and it made an impact on me.  Walter always told me “the reason God didn’t make you filthy rich is because he knew you’d give it all away.”

Q:  You have a strong focus on education and arts with your philanthropic efforts…what draws you in that direction?

A:  If I had not had the proper education, I would have been nothing more than a seamstress.  With my degree, I was a designer with credibility. Education is so important. For almost 42 years, we have supported education and arts.  Arts liberate the spirit and elevate self-expression. Arts education is humanizing and leads to creativity, which is essential to innovation and problem-solving.  It helps to stir the kind of critical thinking that will prepare future generations to more effectively deal with whatever challenges lie ahead.

Q:  What is your philosophy on philanthropic giving?

A:  A responsible attitude of wanting to help others is essential.  Being personally wealthy isn’t essential to philanthropy. One can create a legacy and make an impact in increments.  People who are thinking about philanthropy can partner with established, worthy institutions (i.e. Schools, Churches, Museums, Hospitals.) I partner with the Central Indiana Community Foundation and Indiana University Foundation, as examples. You should contribute deliberately and over enough time so that your contributions will be of consequence to them.  All things being relative, I would say give until it feels good. You will never be remembered for what you bought…only for what you gave, and what you have given beyond your personal need.  It is incumbent on each of us to give.

Opening of the Bes Ben Exhibit at the Indianapolis Museum of Art, April 20, 2018. With Alpha is the Milliner, Abigail Aldridge. Her hat is the work of Milliner Joe Rainey.

Q:  What project are you most proud of?

A:  The Freedom Center https://www.freedomcenter.org/   Walter passed two years into the project and I spent the next 6 years working to finish it.  The Center holds the capacity to change lives.

Editor’s Note:  I contacted the current Director of The National Underground Railroad Freedom Center, Dion Brown, for a quote to share based on Alpha’s comment on the importance of the Center.  Says Brown, “The Center IS changing lives. Mrs. Blackburn should know that Walter lives every day here…he is incorporated into the script as to his vision when the docents talk about the building.  His vision that includes how the smooth side of the stone represents the triumphs and the rough side represents the struggles is shared to over 100k people per year. We do programs on Freedom 55, LGBTQ community, Teen Bullying, etc. All of this ties to that vision of showing the struggles. Walter left a great legacy and the building is actually featured in many commercials you see about Cincinnati.”

Alpha shared a snippet from the Cincinnati Enquirer about the Freedom Center and their founding board.  Quoted here is Ed Rigaud, Freedom Center’s first President and founding Executive Director:  “We got on the phone and started calling people.  At that point, it was me, John Pepper (former Procter & Gamble Chairman) and Andrew Young, with tremendous help from Nate Jones (retired federal appeals court judge) and Vernon Jordan (civil rights leader).”

Q:  What is your legacy?

A:  Hope I’m leaving an example – you have to make an impact that cuts to the core; work from the inside out.  The young lives who receive the Blackburn scholarships understand their responsibility is to figure out how they can contribute to making society better, starting with where they are right now.  A young woman at a scholarship show came up to me and said, “we want to do what you are doing…scholarships.” She wanted to give scholarships through me. Inspiring others to find their own way to give is what I hope for.