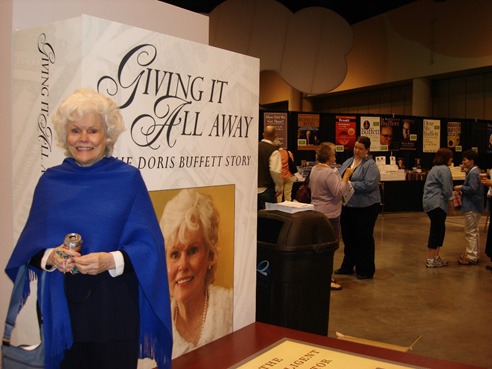 Publisher’s Note:  So long ago, I can’t remember exactly when, I had the privilege of interviewing Doris Buffett for a television show I produced and hosted locally.  We met at the area domestic violence program’s women’s shelter (one of her favorite charitable projects) and talked about philanthropy and her legacy.  Funny, gutsy, and completely authentic, this amazing lady knew exactly what she wanted to impact and how she was going to go about doing it.  It seemed so appropriate for me to include “The Sunshine Lady” in this edition because I doubt many of you even know that Warren Buffett has a sister, much, less, one that is as good at spending money (on charity) as he is at making it.  Doris no longer grants interviews, but, I was permitted to share what I’d like to about her and her work.

What follows is an excerpt of an article from The Sunshine Lady Foundation web site:

The Sunshine Lady Foundation (SLF) was founded in 1996 in North Carolina by Doris Buffett. The Foundation is inspired by Doris’ vision and energy and is funded through her immense generosity. In the preface of her biography “Giving It All Away, The Doris Buffett Story” (thedorisbuffettstory.com) Warren Buffett wrote: “My sister, Doris, is a philanthropist, but far from an ordinary one. Some people write a large number of checks; others invest a large amount of time and effort. Doris does both. She’s smart about how she does it as well, combining a soft heart with a hard head.”

When Doris created the Foundation, to get the ball rolling, she started by enlisting friends and family, known then as Sunbeams, who were empowered to bring recommendations for funding for needs within their own communities. If approved for funding, Sunbeams oversaw the uses of funds and reported back. The Sunbeam approach was eventually phased out as the Foundation developed programs and established relationships with recipient organizations but through the original Sunbeam network Doris and her board and staff, almost all of whom are still actively involved after two decades, learned the “philanthropic” ropes.

In 1998 Doris initiated the first big Sunshine Lady investment, a grant to Clemson University for the start-up Call Me Mister program, designed to increase the pool of available teachers from more diverse backgrounds, particularly among the lowest-performing elementary schools. (www.clemson.edu/education/callmemister) The Foundation has continued supporting Call Me Mister since then to honor Doris’ early inspiration.

The Sunshine Lady Scholarship Program was opened in 1998 to college-bound students with unmet financial need and academic talent from eastern NC by Mary Ellen Box who continues today as personal mentor and director of the program. Since then, over 1,200 students have graduated from a wide variety of colleges and many, after all these years, continue to communicate their gratitude to Doris who met every student personally to share her expectations, advice, wisdom, and friendship until she retired in 2016.

In 1999, John Sedgwick in an article in Worth magazine aptly described The Sunshine Lady Foundation as “uniquely hands-on, folksy, a person-to-person enterprise – the “un-foundation,” a description that is still true today given the 20+ years of continuity in leadership.

From the beginning, Doris Buffett concentrated on needs which she felt were overlooked by other philanthropists. In 1999, she created a nationwide scholarship fund for a very high-risk population: abused women. In 2008 our sister organization, the Women’s Independence Scholarship Program (www.wispinc.org) was “spun off” and endowed by Doris with $30,000,000. The Sunshine Lady Foundation continues to support domestic violence survivors and their families through investments in safe houses and counseling services.

In 2004, Doris was invited by a friend to attend graduation at Sing Sing Correctional Facility in NY. This fortuitous invitation introduced Doris to an entirely new population yearning for an education and a chance to change the trajectory of their lives. Doris felt she had witnessed redemption when she saw a middle-aged inmate in cap and gown, diploma held aloft, tears streaming down his face: “This is for you Ma, I never did anything to make you proud, this is for you.”  She was moved to create a new avenue for investment for Sunshine Lady assets. Currently, the Foundation is funding over two dozen college degree programs in various prisons across the country.

Believing that education is the surest way to move people out of dependency and up the economic ladder, The Sunshine Lady Foundation now commits well over half of the annual budget to purely educational programs.

In 2009 Doris’ admiration and empathy for people who bravely endure the heartbreak and hardship of the lifelong responsibility of raising children with severe developmental disabilities led her to invest in two residences and a short stay respite facility for adults with developmental disabilities in her then beloved home town of Fredericksburg VA. The Sunshine Lady also endowed a residential respite camp for children and adults with disabilities operated by Clemson University. The Foundation continues to respond to this glaring need.

For a decade, from 2006-2016, The Sunshine Lady Foundation operated a humanitarian grants program for individuals which was started in response to Warren’s request to Doris to answer the deluge of letters he began receiving when he announced his intention to donate the lion’s share of his vast fortune to the Gates Foundation. Doris and her staff created a system and assembled a team of women to read the letters, reply to the writer, research the case and ultimately make the decision to fund the request when conditions and requirements were met. The SLF board terminated the program in 2016 when Doris retired from active participation in the Foundation. A similar program is now available at www.letters.foundation

You can read more about the Sunshine Lady and SLF at https://www.sunshinelady.org/