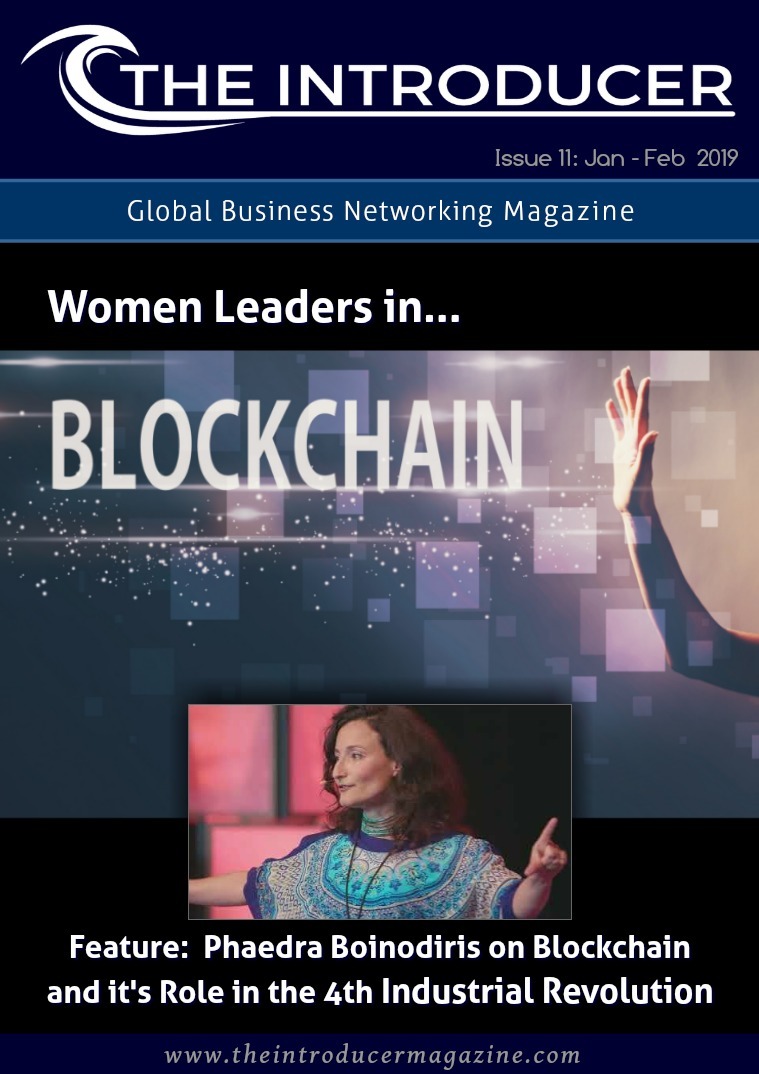 (1/20/19) It’s time:  the posting everyone waits for…the networking opportunities we see between The Introducer game changers from this issue (# 11) (and previous).  Note:  Here’s the link to this issue for reference.  Let’s get to it.

Leading off with Phaedra Boinodiris (photo left) who wrote the feature article in this issue, but, who was also spotlighted as a game changer in Issue # 6. She and Robert Branch, Issue # 2 (a Frontrunners League board member) should connect. Robert serves as our contact for the Frontrunners Business Partners, Living Learning and Working, Inc. (LLW). LLW has strong connections with historically black colleges around the US. If IBM’s Blockchain Ledger project for gathering experiences and certifications for education could use some more academic attention, Robert can make that happen. Also, Larry Griffith, Issue #9, (Senior VP, Programs & Student Services, United Negro College Fund–UNCF) would be a valuable connection now…and for the future. This brilliant young man is on the rise in the world of education. UNCF is the largest provider of scholarships to students in the US and their students come from all racial backgrounds. I can see a meaningful conversation here.

Chrissa McFarlane and Patricia Monthe (Issue # 7)  whose Medx eHealth Center provides as complete a telehealth experience as can be had (including payment options for self as the patient or on behalf of a family member), and is aimed particularly at those countries where higher-level healthcare can’t be found. From The Netherlands, Patricia has been growing her business quickly over the last year – perhaps a collaboration?

Karen Keeley and Caterina Ferrara should connect for a couple of reasons: #1 Both are into research in the biomedical space. #2 Blockchain is a high priority in their leadership work (Caterina founded Ladies in Blockchainand Karen serves on the UN Blockchain for Impact Global Health Steering Committee.)

Liliana Reasor, who is using her SupraFin to address global financial inclusion, would have an interesting chat with Paolo Sironi (Issue # 5)  Member, IBM Industry Academy, and IBM Watson Financial Services. Paolo is a fintech thought leader, speaker, and author. Knowing about Liliana’s work could open the door to new ideas and contacts for both.

Shawnna Hoffman wants to talk with leaders in diversity and inclusion. Hugo Balta Issue #4 has left ESPN where it was his job to create more of a diversity/inclusion environment with a hispanic focus, but all that’s changed now. https://www.linkedin.com/in/hugobalta/ He is media-focused, but, his postings and personal philosophy totally point to broad-scope diversity/inclusion.  He speaks and is a thought-leader on the topic in the media world. Convo with him could lead to more interesting networking. (See Liliana’s bullet on Paolo, also.) Kenneth Goodwin Issue # 3  is a fintech thought leader and Blockchain advisor. In addition, he is an Adjunct Professor of International Trade and Corporate Ethics at Baruch College in NY. He’s served on the White House Business Council’s “Business Forward” effort. I believe Shawnna would gain some insights from him based on her stated networking interests.

Jane Thomason –She and Robert Branch (see first bullet on Phaedra) should definitely connect based on her interests in talking with global impact organizations working on SDGs. Actually, The Frontrunners Leaguewww.frontrunnersleague.com (which, as of now, she has membership rights) and Robert’s affiliation with Living Learning & Working https://www.linkedin.com/company/living-learning-working/ have a partnership based on business development as well as management of projects around the globe tapping a variety of social impact spaces. Note to Jane (reach out – we should get on a call.) Nola Paterni, Issue # 3 is Development Officer for IntraHealth and International Producer of SwitchPoint conference (see the ad in the issue). First, this conference is like nothing most have ever experienced before. (Note from Mary:  I attended last year and actually met 3 of my game changers there – 1 from India. Phaedra suggested it to me and claims it as one of her favorites. She’s often a speaker at SwitchPoint. Every single attendee and speaker is someone you want in your network, and, while global health is the focus, it’s not the only impact topic represented on stage or by attendees.)  A convo with Nola could eventually bring Jane over to the SwitchPoint stage and wouldn’t we love that!

Tory Cenaj and Chrissa McFarlane should connect if they’ve not already. Tory wants to network with “pioneers, startups, and market makers in the healthtech sector who are bringing democratization and equity to patients and efficiency to health systems.” Chrissa seems to embrace that from a personal and business point of view.  Note what was shared within Jane’s bullet above about Nola Paterni. She may also be a good contact.  Since Tory is a publisher in the healthtech space, she knows many excellent contacts (some of them have introduced themselves to me because of her), but, here’s a few others she may not know but maybe should: Rafael Grossmann, MD Issue # 7 – 4x TedX speaker and avid advocate for all things health/med tech. Patricia Monthe (see Chrissa’s bullet). Mei Chen Issue # 3 – CEO and Chief Scientist, Cogilex and Founder/Pres. Seenso Institute of Public Health. The big thing here is that Mei and her husband have invented AI voice chatbots that are amazing and health/wellness is their focus. Nigel Ten Fleming Issue # 7  has been a long-time investor and promoter of innovative tech and has been contributing his considerable expertise in the field to fascinating health-related projects of late. And, lastly, Robert Branch (see Phaedra’s bullet for info. He’s the connecting point to LLW’s Asia country head (healthtech thought leader and investor.)

Caterina Ferrara and Tory should connect as both are into the research side of healthtech. Cate mentions biomedical research in her profile and that may interest Tory. Here’s a head’s up for Cate:  next issue of The Introducer is The Value of HealthTech — stay tuned as there will be plenty of contacts for her, Tory, and others in that issue.

Karen Keeley and Phaedra should connect over their mutual interests in distributed ledger tech.

Marisol Guzman and Robert Branch (see Phaedra’s bullet) should connect to see about an intro to the LLW country head in Mexico relative to new projects that nicely dovetail with her interests in transportation and innovative tech. Also, she might connect with Dr. Nema (that’s what we call him) #Issue 8 relative to his innovations in renewable power. Stephanie Hayden, CEO/Founder of Metropolitan Intelligence #Issue 8 has extreme expertise in using data to solve big problems, and real-time data optimization was one of Marisol’s stated interests.

That’s it for now.  Should be some busy networking going on now.  Maybe you see a connection you need to make here. Get to it.