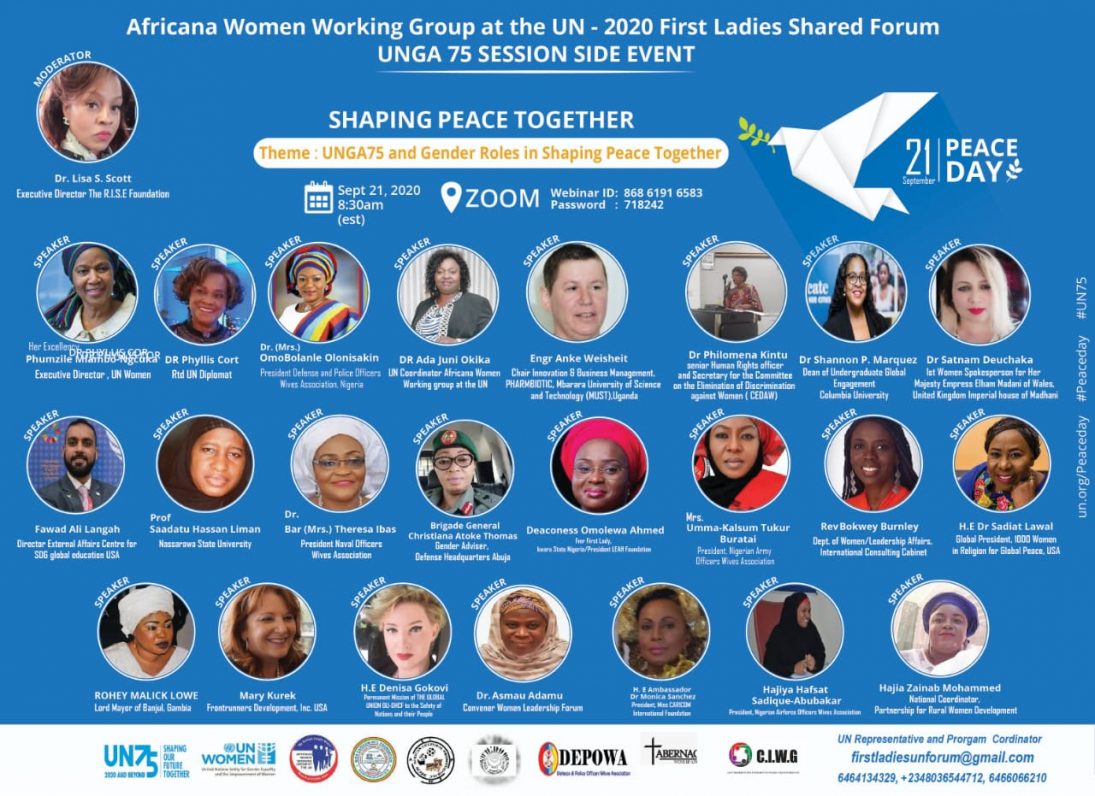 From Mary Kurek:  On International Peace Day 2020 (Sept. 21), I had the privilege of speaking on a panel for an event called “Gender Roles in Shaping Peace Together” – First Ladies Shared Forum, a UNGA75 session side event hosted by Africana Women Working Group – UN2020.  What follows below are the remarks I made as a member of the panel.

From the Notorious Ruth Bader Ginsberg

“Fight for the things that you care about, but do it in a way that will lead others to join you.”

— From a 2015 luncheon at Harvard University

The entire premise and mission of my company, Frontrunners Development is to carve a path from solution to impact.  We embrace creative thinkers, risk-takers, and doers of good deeds.  We push innovation toward the target where it will do the most good and we take by hand the young people around the globe who see possibility where no one else does and are willing to change what needs changing to make us and our planet better.  We do this through the first global online magazine that is actually meant to be a networking tool.  It’s called Frontrunners Innovate.  Those innovators we invite to be featured in the magazine fall into a curated network called the Frontrunners League which has become an activated group of solution providers, mentors, and collaborators for social impact. “Frontrunners” aptly describes who and what we are.

From the standpoint of equality, we have embraced and moved women leaders in fintech to the surface, giving them their own visibility in our magazine and helping them to connect with one another to share their voices.  We’ve given an edition of our magazine to women’s empowerment – sharing role models and their work to others around the world.  Recently, we’ve put a spotlight on women’s health sharing the stories of solution providers who are working in marginalized areas of the world providing repurposed medical equipment for women, contraception, and menstrual supplies, with education and training.

And, once we put a spotlight on an issue, we don’t leave it in the online pages of the magazine–we’re working to make connections between these people and the resources they need.  We are currently connecting a young woman leader in Kenya who has started a leadership program for community impact managers with several young women throughout Africa who need that free training to run their own programs that are impacting women in their countries. They need to know how to write business plans, grants, and budgets.  All of what we do creates a momentum – a ripple forward that brings balance to gender leadership.

We also mentor young women AND men (because we need everyone to be onboard).  Inclusion and equality is not a singular endeavor that involves just women.  Dr. Osita Anniemeka, an education and empowerment leader, and I partnered through the Sub-Saharan Open University, headquartered in Nigeria, to pilot the first-ever World Hope Youth Mentors Program last year, matching mentors from my Frontrunners League network with young entrepreneurs from programs in several countries. The mentoring program will continue under the university as we move out of the pandemic.

Putting a supporting foundation under young women around the world who show promise in leadership is so critical.  We have a 13-year-old girl now from Tanzania who was introduced to us by her father after he read an edition of our magazine on mental health.  He told us his young daughter had done a Youtube presentation on mental health. Upon viewing it, we were stunned at her presence and intelligence on the subject.  And, with his approval, we are connecting this talented young public speaker/advocate to leadership opportunities she would not have had otherwise.  We know she will make a difference and she will be a fabulous role model for others.  We know because she’s already told us that empowerment is what she wants to speak about.  If we do nothing else but lift her to the place where she can be heard, I think we’ve done a great job.

Now, I want to read this excerpt from a Wikipedia bit on a woman I think you’ll agree has made it in a man’s world against all odds and yes, with the help of men.

“Penka Kouneva is a Bulgarian-American composer, orchestrator and soundtrack producer. In 1999, she began working in film & television, and in 2009 began to score for videogames (Prince of Persia: The Forgotten Sands and Transformers: Revenge of the Fallen video games.

I know and have worked with Penka for over 3 years.  Penka came to the US from Bulgaria with $100 in her pocket and a scholarship to attend Duke University.  She came out of Duke with honors and headed to Hollywood to claim a place as a leading composer and make her fortune.  Surprise! She had just entered a totally male-dominated industry.  She worked hard wanting to bring her family from the devastatingly poor area of Bulgaria where they lived.  She brought her sister over from Bulgaria and paid for her to attend a 4-year college and then brought her parents over and set them up in a home.  It’s been a while since I’ve spoken to her, but, Penka told me she owned one pair of shoes and works as hard as any man in the industry, but, she had to rely on everyone (male and female) to help support her moving up the ladder.  She does have male mentors and supporters. Actually, plenty of them supported her crowd-funding campaign to finance her first concept album.  She blew out her goal, raising more than the $25k she was looking to raise.  This gal isn’t bitter about her battle to create a name for herself.  She has the kind of spirit and professionalism that is appreciated by male and female.

In closing – if I could share advice, it would be that being fearless about connecting women to resources (female and male) and making mentoring critical parts of any and all programmatic endeavors relating to empowerment, equality, and inclusion would be my contribution.

Thank you for all the work you are doing and I promise to continue doing my part.