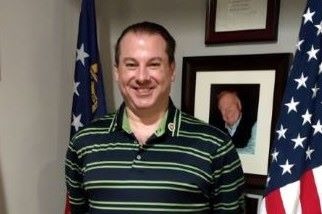 From Ambassador Verniero:  “In 2015, I suffered several strokes from a terminal rare blood cancer-polycythemia vera w/ GI AV malformations (aneurysms). The resulting symptoms/strokes have terminally/permanently disabled my physical being, not my limited spirit. Years of physicians ignoring symptom complaints exacerbated present conditions.”
Publisher’s note:  Before this spotlight was completed, Ambassador Verniero found himself in the hospital once again.  Still, his determination endures and what follows is the result of his participation in this magazine literally the morning of his release from the hospital.  We’d like to extend our heartfelt gratitude to Ambassador Verniero for his courage and support in the face of extreme difficulty.  When those in selfless service create a legacy within situations of personal duress, we want to especially applaud them.  At the end of this spotlight, you will find the Ambassador’s Linkedin profile.  Feel free to share your generous “applause” there and in the comment section below.

Ambassador at the State of Georgia General Assembly

The Honorable Samuel Verniero, Ph.D., MS, MA, possesses a wealth of leadership, humanitarian, government, political and diplomatic experiences. He has worked with the United Nations in various capacities. He is a distinguished and honored Knight Templar, and has been recognized and commissioned as an Honorable Colonel by many state Governors, Lieutenant Governors, and Secretary of States. His multiple leadership roles involve working with the global Guilderberg to Prime Ministers, Deputy Prime Ministers, European Union (EU) Parliament members, NATO, and has garnered honors and recognitions with royal families and several government leaders.
Ambassador Verniero was also Commissioned Officer-Colonel, Staff Office of the Governor, whereas the commission of Kentucky Colonel is the highest title of honor bestowed by the governor of Kentucky. He served as University President Advisory Council Member, Office of the University President whereas an executive-level group of by invitation leaders who are committed to advancing the mission of De Sales University. The Ambassador was appointed appellate Judicial Board Member (ALJ)/Featured Board Member of the Month/Speakers’ Bureau Member, Lifetime Guild Member (Guilderberg), Grand Master of The Order of the Holy Sepulchre, a lay institution of the Roman Catholic Church which is charged with providing for the needs of the Latin Patriarchate of Jerusalem by maintaining and supporting the work of the Church in the Holy Land.
The Ambassador has also served as Executive Committee Member General Members Board Officer/Leadership Team of the Region 1 Field Office plans,  which oversees a network of public mental health, developmental disabilities, addictive disease and prevention services for 31 counties. He joined The Lexus Company Advisory Board, a community of selected Lexus owners directly involved in the on-going evaluation and development of Lexus products and services. He participated in the LinkedIn Advisory Board Member (Career Advisor); thereafter he served as State Chairman of The Republican National Hispanic Assembly of The United States of America (USA) as first Vice-Chairman, then as Chairman. The Ambassador is also Descendant Dignitary/Sir Knight of The Knights Templar (O.S.M.T.H./O.F.M.).

The Ambassador currently serves as Deputy High Commissioner of the World Humanity Commission, Dept. of Foreign Affairs, Africa & Asia.
I asked the Ambassador to share a few insights into his experience using his own words.  What follows is his response:

“Regarding appointments, as with all boards, when offered a post, I advise to my limited capacity due to terminal illnesses. I am honored that, when selected and appointed, those in charge understand and continue with their desire to have me serve. I offer what insights I may (for example, my recent appointment to CBD board, I was asked by the executive director for insights and recommendations with specific mission and purpose statements to be used for legal definitions of said entities, followed by messages of gratitude for my participation by ED as such was used…) and assist with contacts on all levels, including review and assessment when available in my limited capacity or capability.  As all know, due to aneurysms and arterial vascular malformations symptomatic with strokes, etc, I am unable and unavailable to fly until neurologist clears, hopefully, in such time.  In a few boards, I was informed they were satisfied with the presence of my name alone due to past experience and recognitions from achievements which support and solidify the boards’ present mission to accomplish what was created for results. I am extremely honored for this recognition.

Ambassador Rubina Ali of the World Humanity Commission contacted me requesting I serve as Deputy High Commissioner with the knowledge I am unable to travel to Africa at the present time. The honorable appointment, of course, like all, are volunteer in nature and appreciate participation and assistance if possible within the means of those in service. I am humbled that Ambassador Ali sought my involvement and participation in my continued proactive communications with global leaders, including staff members of Parliament and others. I am blessed so many had taken the time to write recommendations with a sentence or two uploading onto my LinkedIn profile.

Governors, such as Georgia, recognize past accomplishments and my drive to continue in service (most days cancer has bested and beaten me) by their commission of me in an “Honorable” status with the executive office of the governor as an official (volunteer). I pursue healthcare faults and failures in this capacity or others as a voice to all of us receiving extremely less than desirable medical care or abuses in the process and system, violating HIPPA law, federal disability definitions, continuity measures, medicine, treatment, diagnosis, and others. Like myself, only the symptoms are briefly analyzed with a complete lack of care or focus on the underlying illness causing such symptoms. For example, a new television program has been rolled out basically addressing the failures of diagnostic assessments with the hope it may be resolved for an answer to the patient’s suffering and inability to receive care. The directives of basic care or directions to assess all aspects of one’s illness have been negated for corporate hospital policy focused on administration, indemnification, and compensation. Care advocacy has fallen onto ourselves and those who protect us (extremely limited resources). As with many missions for those without direction, I continue to serve if capable of providing others with possible resources. All exceed one mission of one board in one department or organization requiring additional assistance. So, when I am asked, I assess if I can be a benefit to a board and provide my limitations of said involvement not to have unrealistic expectations.