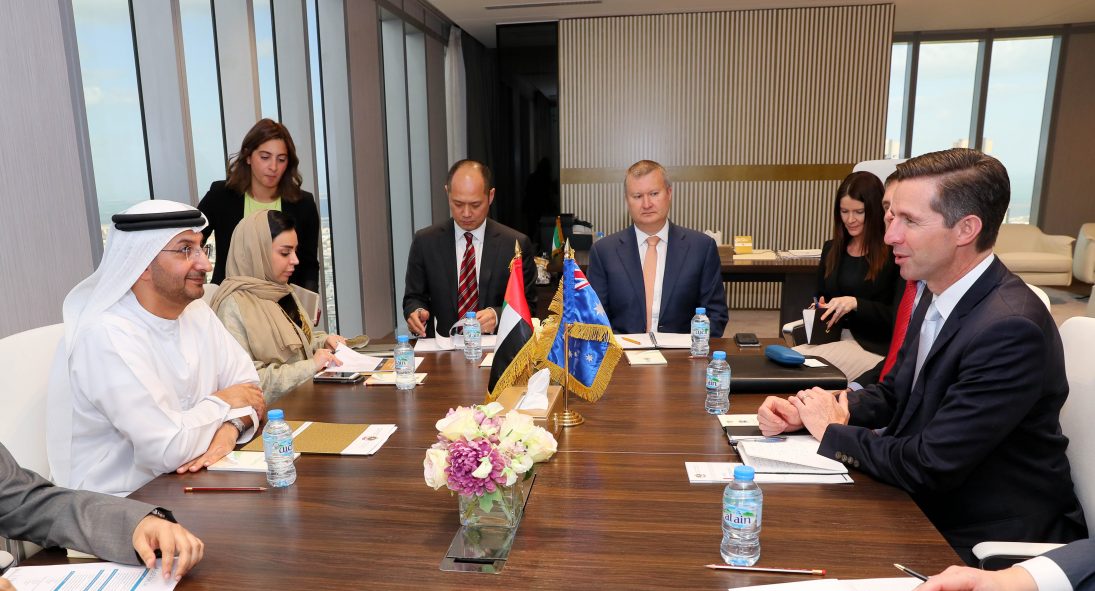 (From www.dcibf.ae) His Excellency Abdulla Al Saleh is the Under Secretary of the Foreign Trade and Industry at the UAE Ministry of Economy. Among his responsibilities is to drive closer cooperation, increase trade and investment flows, and deepen economic ties between UAE and the world. He spearheads UAE Free Trade negotiations within the GCC framework with regional blocks and other countries. He is also Vice-Chairman of the National Committee of the World Trade Organization. He oversees trade policies and UAE’s fulfillment of commitments. Amongst several divisions, he leads a trade and promotional team and oversees the network of economic missions at UAE Embassies.

Also, Al Saleh is Chairman of the Supervisory Committee for Exports; Honorary President of the Arab-Chinese Centre for International Exchange; Vice President of the Annual Investment Forum; Board member of the UAE International Investors Council, which enables UAE investors to invest in key markets; Board member at the Emirates Gender Balancing Council, which aims to increase women’s participation in national development across all sectors and develop their skills and provide them with the necessary tools to support the UAE’s future progress. He is member of the Advisory Boards at New York University Abu Dhabi, Zayed University Business and Management School, Sharjah University Business School, and the University of Wollongong in Dubai (Business School).

Earlier in his career, Al Saleh was a diplomat in UAE Embassies in the United States and France. He holds an MSc in International Politics from the American University in DC and a Bachelors degree of Political Sciences from the UAE University.

I asked Undersecretary Al Saleh some questions regarding his work and his legacy mission.  What follows are his responses.

Q & A with Undersecretary Al Saleh:

Q:  As a diplomat, your work has been involved largely in international trade, which means there is a high degree of cultural understanding and relationship development within your skillset.  What challenges have you encountered in this work and how have you overcome them?

A:  The one thing that has helped me navigate the waters of international relations is – Cultural diplomacy, which plays a crucial role in building relations among states and is an effective foreign policy instrument.  Also, I would like to highlight the importance of research. It is very important to learn about a country’s customs before a visit, what they value, how they behave, what their long-term interests are, and what they need or want. Equally important is to know how they build their relationships and conduct their work and what their modus operandi is.  Further to that, I have always emphasized on understanding the historical background as well as the latest developments. So, one needs to go prepared and be aware of the situation and the person one will be meeting – this has helped me to talk about the right topics, negotiate well and build a long-standing personal and professional relationship. I have used this knowledge to craft my message, address specific needs and show that I understand their values. It is very imperative to listen, as important as it is to speak. This helps one to avoid any missteps.

Q:  What direction and projects/programs are ahead to solve problems or enhance value in the economy in the UAE?

A:  UAE today is one of the most diversified economies in our region, and contribution of non-oil sectors to total GDP reached 70.5% in 2018 and we will continue our efforts to diversify and strengthen non-oil sectors, and support the development of business.  As you may already know, the UAE offers plenty of unique advantages to business and investors through its world-class infrastructure and state-of-the-art logistics facilities and free zones. Strategically located between three continents, the UAE is an ideal hub for companies that want to do business in the Middle East and expand their reach to new markets.

Building a competitive knowledge-based economy is a key objective of the UAE’s Vision 2021 and part of this strategy is focused on expanding our country’s ties with other economies around the world which offer new trade and investment opportunities. In the World Bank’s Ease of Doing Business 2019 Report, UAE took a quantum leap and moved to the 11th position from being ranked 21st, globally. The country ranks first globally for business efficiency, outshining other economies in areas such as productivity, digital transformation, and entrepreneurship. The UAE has been working on several other bold reform initiatives, including the bankruptcy law, to boost investor confidence over the past several years. In 2018, we approved a foreign direct investment law that is expected to boost FDI flows by up to 20 percent this year, from an average growth rate of 8 percent. The new UAE investment law, which allows up to 100 percent ownership to foreign investors in some specific onshore business sectors, is expected to give a major fillip to private and foreign direct investments (FDIs). Last year, we also announced the economic stimulus package by Abu Dhabi and Dubai to promote investment and boost private sector activity.  For instance, While Abu Dhabi has put in AED 50 billion with the aim to transform the ease of doing business, and bring lasting economic benefits to Emiratis, residents, and investors, Dubai’s economic stimulus package aimed at emphasizing the importance of a knowledge economy in promoting sustainable development with initiatives such as freezing private school fees, waiving the 4 percent late-payment fine for Dubai Land Department transactions and reducing and canceling certain government fees. The incentives are aimed at attracting foreign direct investments, improving local manufacturing, and creating a better investment environment. Further to this, In October 2018, the Federal Cabinet has adopted an integrated visa system that includes the provision of 10-year visas to specialists in medical, scientific, research and technical fields, and innovators, which will go a long way in reinforcing business confidence and igniting a sense of belonging among expatriates, analysts, and business professionals.

Q:  You have spent some effort on diverse social impact spaces like gender equality and innovative tech.  What draws you to these particular issues and how do they connect with your daily work?

A:  The UAE Government has been particularly supportive of innovation becoming an integral part of the economic fabric. It has placed innovation as the cornerstone of its vision for the future and is making continuous efforts to establish a stimulating environment for innovation in the form of supportive institutions and laws. One of our most visible achievements is that the country’s ranking in the Global Innovation Index  (GII) has consistently gone up, and in 2018, we were ranked 38th globally and 1st regionally; up from 41st position in 2016.  The UAE has also been very determined about the fourth industrial revolution, which is evident from the strategies and institutions put in place to ensure that new technologies, such as AI and blockchain are the engines of UAE’s future growth. In October 2017, the UAE Government launched ‘UAE Strategy for Artificial Intelligence (AI)’.  This is the first such strategy of its kind in the region and the entire world to promote government performance and create an innovative and highly-productive environment. The UAE maintained its top position as the most innovative country in the Arab world in 2019, while also improving its global ranking by two positions to 36th, according to the annual Global Innovation Index (GII). These achievements are founded on a determined effort to ensure we remain on track with our innovation goals.  From Expo 2020 to Smart City initiatives, innovation is becoming the foundation for organizations to react to peoples’ needs in real-time and predict how government services will transform citizen experiences, and ensure that costs, security, and innovation are optimized.

On your other point of gender – women are a very important part of the economic and social fabric of any country and the UAE has been committed to building the skills of the female workforce so that they can contribute to the growth of our diversified economy. In fact, The UAE is the first country in the region to enact legislation requiring female board members in every company and government agency. The entrepreneurial wave can also be seen among the UAE startup firms and a number of women are now joining hands to build their own businesses.

Q:  What legacy are you building now for yourself, your family, and your country?

A:  Having been in public service for 28 years, I believe I have learned a lot of values – in terms of duty, integrity, and a sense of pride in the nation, which I have then given back to the society by serving the nation well.  2019 is the Year of Tolerance which is an extension of the Year of Zayed, as it upholds the values of tolerance and co-existence that the late H.H Sheikh Zayed bin Sultan established among the people of the UAE. This value holds so much importance in today’s world and as part of the public sector, I would like to promote peaceful co-existence between local, regional, and international communities.  UAE, which is a melting pot of different cultures, is a prime example of how tolerance, pluralism, and societal integration are critical parameters to determine a country’s development.  In the words of HH Sheikh Mohammed bin Rashid Al Maktoum, Vice-President and Prime Minister of UAE and the ruler of Dubai…“Good governance is about nothing more or less than creating happiness. It really is that simple.”